The Gregg Allman Laid Back Legacy

The Gregg Allman Legacy Band was formed for a few special shows to bring back the memory and power of the "GREGG ALLMAN/LIVE LAID BACK TOUR '74 with Special Guests/ COWBOY."

Tommy Talton/guitar, Randall Bramblett/organ and sax, CharlieHayward/bass, and Bill Stewart/drums were all original members of that original band in 1974! They were also the players on the studio album "LAID BACK, "Gregg's first solo album release. Their friendship with Gregg and experience in making the music that has endured is why this band exists. It is an 11 piece band with outstanding vocals by Mike Veal, exceptional keyboard work by Tom Grose. Superb drummer, Jack Jones joins the solidarity of BillStewart on the double drums setup and Chris Blackwell brings fine guitar work along with the 3 piece horn section consisting of Bryan Lopes/sax, KarlLiberatore/trumpet, and Kevin Hyde/trombone. This comment from a fan says it all:

"So glad these Blessed musicians share their talents and pay tribute to Gregg and Cowboy. definitely go see them if they're anywhere near. The road goes on forever." 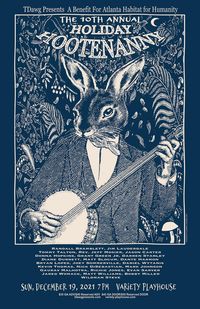 The 10th Annual Hootenanny for Atlanta Habitat For Humanity

A Benefit for Atlanta Habitat For Humanity with musicians from near and far have a night of playing together for a Great Cause! And Celebrating the lives of Ike Stubblefield, Tom Gray, and Count M'butu.

Performing their current album, World Gone Mad, as well as classic songs of The Band, The Weight Band is led by Jim Weider, a 15-year former member of The Band and the Levon Helm Band. The Weight Band originated in 2013 inside the famed Woodstock barn of Levon Helm. Weider was inspired by Helm to carry on the musical legacy of the Rock and Roll Hall of Fame group. Years of touring have seen The Weight Band revive “The Woodstock Sound,” keeping the spirit of Americana/Roots Rock alive for audiences of all ages. They continue to keep the sound vibrant by releasing new music, evidenced by the album World Gone Mad (February 2018.) Their live set features Weight Band songs from the new album as well as fan favorites from The Band’s treasured catalog, including “Up On Cripple Creek,” “The Weight,” and “The Night They Drove Old Dixie Down.” The Weight Band includes Brian Mitchell (The Levon Helm Band), Michael Bram (Jason Mraz), Matt Zeiner (Dickey Betts Band), and Albert Rogers (The Jim Weider Band). With a US and international tour schedule slated for 2019 and beyond, The Weight Band complements The Band’s timeless legacy while pushing the music forward for new audiences. Billboard, Relix Magazine, and others have taken notice, as have generations of The Band fans who have yearned for new material since their last studio release almost 20 years ago. The Boston Globe proclaims World Gone Mad “strikes a chord between past & present,” and the Chicago Tribune says “The Weight carries on where The Band left off.”

Scott Sharrard and Friends “Flashin’ Back to the Second Atlanta Pop Fest” Travers Brothership Lobby and Doors open at 6:00 / Show at 7:00

Friday Night at the Grand Opera House in Macon: The Chris Hicks Band and Friends Idlewild South Lobby opens at 5:00 / Doors open at 6:00 / Show at 7:00

We are very happy to announce that our old friend, bass player Charlie Hayward, formerly of the Charlie Daniels Band and an original member of the "Laid Back" studio album band [along with Bill Stewart, Randall Bramblett, and Tommy Talton] will be joining us on stage at The Variety Playhouse on Sept. 3, 2021, 8 pm. This show was canceled last year due to the pandemic situation. We are ready to get this thing rockin'! Don't miss it, get your tickets before they're gone! 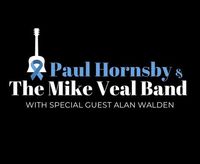 An evening of music to benefit the Georgia chapter of the American Cancer Society.

Paul Hornsby is an acclaimed record producer and musician best known for his work at Capricorn Records in Macon, Georgia, during the 1970s. He was a member of the band Hour Glass. At Capricorn Studios, he produced and engineered the Marshall Tucker Band, the Charlie Daniels band, and others. He continued producing after the closing of Capricorn, opening his Muscadine Studios where he still works today.

Mr. Hornsby will sign copies of his memoir, Fix It in the Mix, from 6pm-8pm.

The Mike Veal Band plays a hot combination of blues, rock, and. Diverse musical backgrounds and regional influences color each member's contribution to the tight sound for which the band is loved. Lead vocalist Mike Veal was born and raised in the heart of the South. As a child living in Milledgeville and Macon, Mike was strongly influenced by area musicians and singers whose lives and songs reflected the true origins of American Blues. At 16, Mike started singing professionally with Sansara Show Band, and later worked with Johnny Rivers, and Gary Puckett and the Union Gap. Today, working with long-time friends and bandmates, Mike consistently delivers 110% on stage, believing "you should never do a song you can't lose yourself in." Tommy Talton, [Cowboy, Gregg Allman, Capricorn Rhythm Section, and studio artist], will be joining Mike and the Band on this show.

Alan Walden is an American manager, publisher, booking agent, and promoter. He has worked with musical acts including Otis Redding, Al Green, Etta James, Boz Scaggs, Lynyrd Skynyrd, and many more. He opened Redwal Music with his brother Phil Walden in 1965, publishing hit songs like "Respect" and "(Sittin' On) The Dock of the Bay.” He also co-founded Capricorn Records with his brother and later went on to form Hustler's Inc., a management and publishing company.

A portion of ticket sales will be donated to the Georgia chapter of the American Cancer Society.

This is an 18 and older concert in our Event Center. 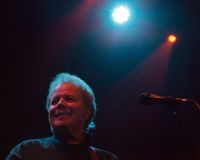 Tommy and band members, Chris Blackwell/guitar, Robby Handley/bass, Jack Jones/drums will be grooving and enjoying the first 'live' gig in over a year for Tommy! It is an outdoor event on a beautiful stage on a ridge overlooking the Alabama River. The Capitol Oyster Bar is a fine seafood restaurant with a beautiful view of the river and marina. Owner and music fan, Lewis Mashburn is dedicated to the finest food and the finest Blues/Rock. This will be a special early evening wang dang doodle! 5 pm - 8 pm Central Time!

Tommy Talton live streaming show. The "Don't Worry For An Hour or So Show"

The first live streamed event from Tommy Talton in 2020! Join us at his home for an hour or so of songs and stories from his long career. Hosted on Facebook Live at https://www.facebook.com/TommyTaltonBand. 8pm Eastern US Time, 7pm Central. The show is free, but if you'd like to show your support, his Tip Jar is http://paypal.me/TommyTalton.

This show, due to the COVID pandemic, will be rescheduled. When we know more about a new date, we will update, Thank you and stay safe and Healthy! The band features some of the best musicians in the nation including original Gregg Allman Band members Tommy Talton, Bill Stewart, and special guest Randall Bramblett. All shows to date have been a sellout. So, Let's go back Down South in 1974 for a great musical journey!

MORE TO BE ANNOUNCED!!! 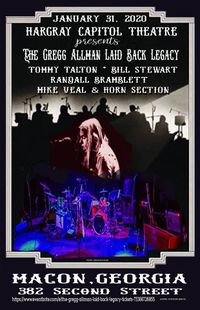 The Gregg Allman Laid Back Legacy is an 11 piece band consisting of former members of Allman's "Laid Back" and 1974 Tour Band. The band features some of the best musicians in the nation as well as former Gregg Allman Band members Tommy Talton, Bill Stewart, and special guest Randall Bramblett. All shows to date have been a sellout. So, Let's go back Down South in 1974 for a great musical journey!

Tickets on sale Friday, October 11 online through Ticketmaster.com or in person at the Macon Coliseum Box Office.

An Evening with the Talton Veal Band

This show has been cancelled while Tommy goes through treatment. He is up and ready to get back on stage asap! Please check this calendar for changes and updates. We would like to thank the Foundry for their understanding!

From Muscle Shoals to Canada! The Muscle Shoals All Stars will play the headlining show at the Vancouver Island MusicFest on July 13th. Before leaving for Canada, the band will premier the show on Tuesday, July 9th at the Marriott Conference Center in Florence.

The Gregg Allman Laid Back Legacy is a 11 piece band consisting of former members of Allman’s “Laid Back” and 1974 Tour Band. The band features some of the best musicians in the nation as well as former Gregg Allman Band members Tommy Talton, Bill Stewart, and special guest Randall Bramblett.  Let’s go back Down South in 1974 for a great musical journey!

Kicking off the concert will be Atlanta blues artist Gitlo Lee!

This will be a fine night of music and fun. Only the second gig for this new partnership with Tommy Talton joining the well-oiled machine known to many, The Mike Veal Band! They will be doing Talton originals and some beautiful covers from many genres. This is one to see and hear! for Tickets: